« The world is going through an unprecedented crisis with a major impact on our business. As soon as the recovery began, our plants and sales network quickly mobilized to meet our customers’ needs, with demand sustained in June by government aid measures in Europe. We are starting the second half of the year with a very high level of orders, a satisfactory level of inventory, a rising price positioning across the entire range, and a new E-TECH Hybrid offer that is unique in its segment and already very well received » said Denis le Vot, member of the Executive Committee, Senior Vice President Sales and Regions of Groupe Renault.

The sales volumes of the Renault brand worldwide rose by 38%, with more than 42,000 vehicles sold in the first half.
In Europe, ZOE is the best-selling car with a sales growth close to 50% to 37,540 units and reached a record level of orders in June with nearly 11,000 orders.
The electric offensive with the arrival of Twingo Z.E. and the launch of E-TECH Hybrid engines (New Clio Hybrid, New Captur Plug-In Hybrid and New Megane Estate Plug-In Hybrid), have strengthened the Group’s trajectory towards achieving its CAFE objectives for 2020.

The sales of the Group amounted to 623,854 vehicles, down 41.8% in a market that was down 38.9%. The Group successfully renewed all its B-segment models under the Renault brand (Clio, Captur and ZOE). New Clio was the best-selling vehicle within the B-segment in Europe in the first half, with 102,949 units sold.
In the first half of the year, the Dacia brand recorded a 48.1% decline in sales to 161,334 vehicles sold, impacted by its exposure to the retail market strongly affected by the Covid-19 crisis.

In June, Group sales in Europe picked up with Renault and Dacia achieving respectively 10.5% (leading brand) and 3.5% market share. The Dacia brand is benefiting fully from customers’ return to the sales network taking advantage of its full range of engines: LPG, gasoline and diesel.

In the Group’s second-largest country in terms of sales volume, Groupe Renault is the leader with a market share of 30.2%, up 1.4 points. Sales fell 19.5% in a market that contracted 23.3%.
The Renault brand’s market share rose 0.3 points to 8.1%. Arkana confirmed its success with more than 7,000 vehicles registered in the first half and established Renault in a brand-new coupe-SUV segment in Russia.
LADA confirms its position as the leading brand on the Russian market with a 20.8% market share, to which must be added 1.3% for the NIVA model (AVTOVAZ) which has just been rebadged LADA in July. LADA Granta and LADA Vesta remain the two best-selling vehicles in Russia.

In a market down 39.0%, Group sales fell 46.9%, mainly due to the new strategy of improving profitability and repositioning vehicle prices.

The Group’s volumes were down 21.2% in a market that declined by 20.8%. The Group is currently implementing a new strategy aimed at refocusing its activities on LCVs with Renault Brilliance Jinbei Automotive Co, Ltd and electric vehicles with eGT New Energy Automotive Co, Ltd (eGT) and Jiangxi Jiangling Group Electric Vehicle Co. Ltd (JMEV). 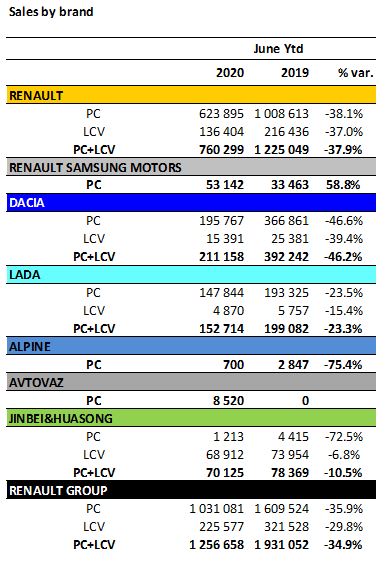 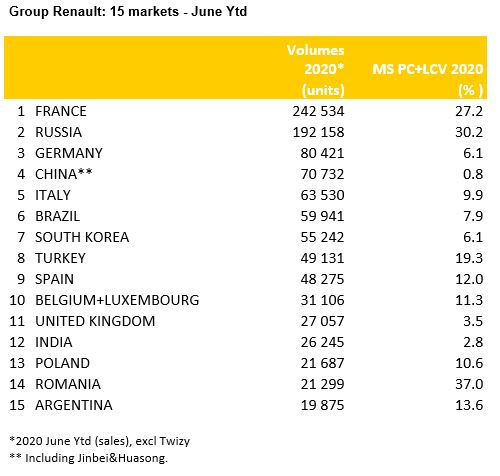