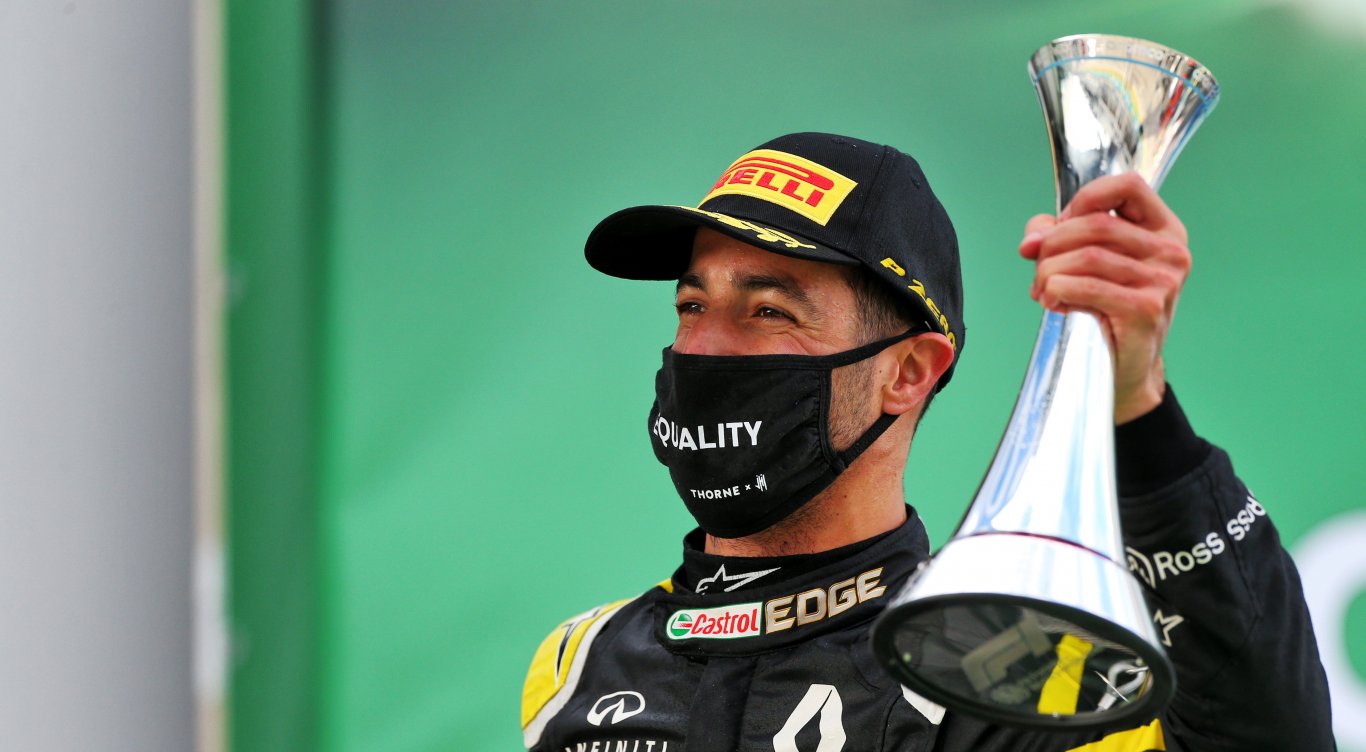 Daniel climbed three places from sixth on the grid and held on for the final podium spot by just over 1.4seconds after a battling display at the wheel of the Renault R.S.20.The 2010 Belgian Grand Prix was the last time the team was on the podium after Robert Kubica’s third place at Spa-Francorchamps.It was a superb team effort from pit wall, factory and garage allied with a stellar drive from the Australian, who had to battle and dig deep to preserve his tyres throughout the 60-lap race in tricky, cold conditions. After gaining a position on lap one, Daniel remained patient before passing Charles Leclerc for fourth with a move on the outside of Turn 2. After Valtteri Bottas pitted, Daniel briefly held onto third place, before pitting on lap 16 under the Virtual Safety Car for Medium tyres.With others around him remaining out during the brief VSC period, Daniel’s plan was to manage the Medium tyres until the end of the race. And with Sergio Perez pitting later and, therefore on much fresher rubber, Daniel faced a fight on his hands in the closing stages of the race. But a late Safety Car meant Daniel was gifted the opportunity to pit for Softs and a much smoother run to the flag. Perez put pressure on at the restart, but Daniel held firm, managing the gap to just over a second at the chequered flag.Team-mate Esteban Ocon retired on lap 23 with a hydraulic issue while running strongly inside the points. After a difficult start off the line, Esteban recovered strongly and was driving well in the top half of the field before his retirement.

“Oh wow, it feels like the first time I ever got a podium. These emotions and that feeling you get when you get out the car, hug the team, the mechanics slapping you on the helmet, it’s just amazing and I am so happy we did it! It’s obviously my first one with Renault and it’s something I wanted to achieve when I set out on this journey with the team. It’s been two and a half years since I’ve been in this press conference too, so it’s been a while for me. I felt like it was coming with our performances in recent races, so I am so happy to have done it. The race itself was pretty tight and there was some discussion on whether to pit for a second stop or not, but we had the luxury of track position. The Safety Car then gave us an advantage, so we made that call and, in the end, it was the right one. What a day!”

“It’s a fantastic team result today and congratulations to Daniel and the team for the superb podium. It’s a massive result for the Constructors’ Championship – that’s the most important thing – and it also underlines the team’s progression this season. On my side, it was looking decent to be honest and we were definitely in line for a top five finish. I did not have the best start but on the first stint, I was managing the tyre quite well and we were in a good place. I basically lost steering, brakes and gears and it’s a hydraulic issue, which we’ll investigate. It’s a shame, but we’ll come back from it and we look forward to the next race.”

“It’s a great feeling that and I would like to share this emotion we had at the track with every team member. It’s been a huge, huge journey to get here and today is a milestone. We earned that podium: we’ve seen it coming for some time. We have had the potential to be there and today we had the right circumstances. While we might need events in front to happen, we have a car that is a good all-rounder and when this type of opportunity comes we have the right team to capitalise. Daniel drove a great race and fully deserved this – we will have to see about that bet now! It is a bit bittersweet as only one car was at the finish line. Esteban was driving a solid race until his car developed a hydraulic issue and we had to retire him. Without it we could have got a huge points result, which is very important as reliability is what will eventually define the championship in Abu Dhabi. But for now we need to celebrate and enjoy this moment as it is a moment that matters in the life of the team.”