“Renault Group is resolutely pursuing its in-depth transformation and turnaround of its activities. These first half results are a proof of this: despite all the headwinds related to the stop of the activity in Russia, the semiconductor crisis and cost inflation, the Group continues to improve its operating performance and is beginning to benefit from the success of new launches.

Having more than compensated for the loss of its Russian activities and continuing its high-speed transformation, Renault Group is upgrading its 2022 full-year financial outlook. In the fall, new mid-term financial outlook and the accelerated roll-out of Renaulution will be presented during its Capital Market Day. All our energies are mobilized to transform Renault Group into a competitive, tech and sustainable player.” said Luca de Meo, CEO of Renault Group

On May 16, 2022, the Board of Directors of Renault Group unanimously approved the signing of agreements to sell 100% of Renault Group’s shares in Renault Russia to the City of Moscow and its 67.69% stake in AVTOVAZ to NAMI (the Central Institute for Research and Development of Automobiles and Engines). In addition, the agreement provides for a call option for Renault Group to buy back its stake in AVTOVAZ, exercisable at certain periods over the next 6 years.

As a result of these agreements:

The price effect, positive by +7.4 points, reflected the continuation of our commercial policy, launched in 2020 Q3, focused on value over volume as well as price increases to offset cost inflation, and an optimization of commercial discounts.  It amounted to +8.4 points in 2022 Q2 after +5.6 points in Q1.

The success of Arkana, launched in 2021 Q2, as well as those of Jogger and Megane E-TECH Electric in H1, emphasized the renewal of Renault brand in the C segment and contributed to generate a positive product mix effect of +3.3 points.

These two effects make it possible to compensate for the loss of volume of -5.2 points, which is mainly explained by the decline of the European automotive market in connection with the shortage of semiconductors.

The impact of sales to partners, negative by -1.8 points, is mainly due to the decrease in production of diesel engines and vehicles for our partners (end of contracts of Master for Opel and Traffic for Fiat at the end of 2021).

The “Other” effect, of -2.1 points, is due to a decrease in the contribution of sales from the Renault Retail Group (RRG) network following the disposals of branches and partially offset by the aftersales performance.

The positive mix/price/enrichment effect of +€1,548 million illustrates the success of the commercial policy focused on value over volume. This policy more than offset the negative volume effect of
-€270 million and the increase in costs (raw materials, purchasing, warranty and manufacturing & logistics costs) which amounted to -€647 million. The latter is mainly explained by the sharp increase in raw materials prices (-€797 million), partially offset by the performance of purchasing (+€167 million).

The contribution of Sales Financing of Mobilize Financial Services (formerly RCI Bank and Services) to the Group’s operating margin reached €582 million, down €11 million compared to 2021 H1, mainly due to the normalization of the level of risk and an average performing assets (€43.7 billion) decreasing in line with the Group’s strategy to optimize vehicle stocks in the network.

In 2022 H1, Mobilize Financial Services successfully completed its first green bond issue for an amount of €500 million with a 5-year maturity. The proceeds of this issue will be used to finance electric vehicles and charging infrastructure. This issue was cashed in early July and is therefore not included in the financial liabilities as at June 30, 2022.

Other operating income and expenses were negative at -€49 million (versus -€70 million in 2021 H1) and were notably explained by restructuring provisions of -€134 million and asset disposals (+€56 million) mainly related to the sale of several commercial subsidiaries of the Group and branches of RRG.

Net financial income and expenses amounted to -€236 million compared to -€138 million in 2021 H1. This deterioration can be explained by the impact of hyperinflation in Argentina, the cost of debt remaining stable.

The contribution of associated companies amounted to €214 million, up by €54 million compared with the first half of 2021. This includes €325 million related to Nissan’s contribution, which more than offset €111 million negative contribution from other associates, notably in connection with the impairment of Renault Nissan Bank shares in Russia.

Current and deferred taxes represented a charge of -€260 million compared to a charge of -€185 million in 2021 H1 in relation with the improvement in profit.

Net income from discontinued operations amounted to -€2.3 billion due to the non-cash adjustment related to the disposals of the Russian industrial activities.

The cash flow of the Automotive business, excluding restructuring expenses, included €800 million of Mobilize Financial Services dividend and reached €2.6 billion, up €0.9 billion compared to 2021 H1. This cash flow largely covered the tangible and intangible investments before asset disposals which amounted to €1.2 billion (€1.1 billion net of disposals).

Excluding the impact of asset disposals, the Group’s net CAPEX and R&D rate was 8.0% of revenue compared to 9.1% in 2021 H1. It amounted to 7.5% including asset disposals.

Automotive operational free cash flow4 was positive at +€956 million taking into account -€278 million of restructuring expenses and a negative change in working capital requirement of -€275 million.

In 2022 H1, Renault Group made an early repayment of €1 billion of the loan of a banking pool benefiting from the guarantee of the French State (PGE) and will reimbursed, in H2, €1 billion for the mandatory annual repayment.  As announced, the entire loan will be reimbursed by the end of 2023 at the latest.

Renault Group is upgrading its 2022 FY financial outlook with:

The Group confirms an impact of the semiconductor crisis estimated at 300,000 vehicles in 2022.

During its Capital Market Day in the fall, Renault Group will present an update of its Renaulution
mid-term financial outlook and its strategy positioning itself as a competitive, tech and sustainable reference player. 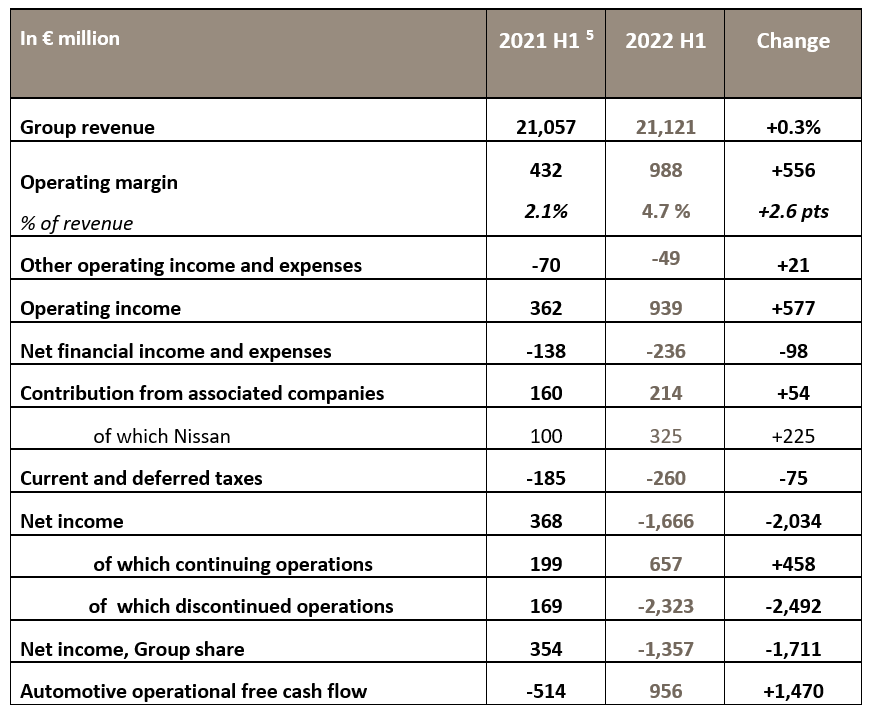 Adjustments of AVTOVAZ and Renault Russia activities in 2021 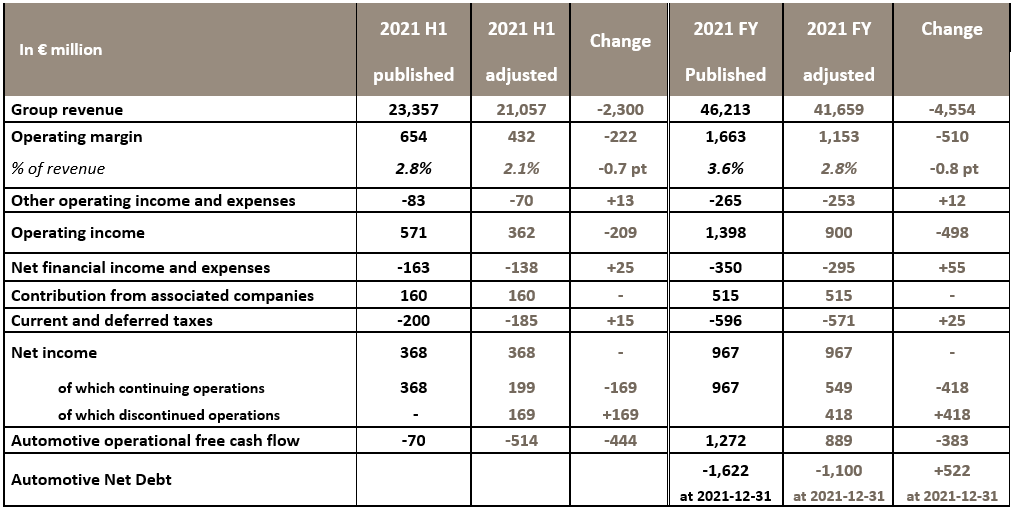 The condensed half-year consolidated financial statements of Renault Group at June 30, 2022 were reviewed by the Board of Directors on July 28, 2022.

The Group’s statutory auditors have conducted a limited review of these financial statements and their half-year report will be issued shortly.

The financial report, with a complete analysis of the financial results in the first half of 2022, is available at www.renaultgroup.com in the “Finance” section.

Link to follow the conference at 8am today and available in replay: events.renaultgroup.com/en/

1- The results presented relate to continuing operations (excluding Avtovaz and Renault Russia whose disposals were announced on May 16, 2022)

2- The E-TECH range consists of electric  and hybrid vehicles

3- In order to analyze the variation in consolidated revenue at constant exchange rates, Renault Group recalculates the revenue for the current period by applying average exchange rates of the previous period.

5- The results presented relate to continuing operations (excluding Avtovaz and Renault Russia whose disposals were announced on May 16, 2022)